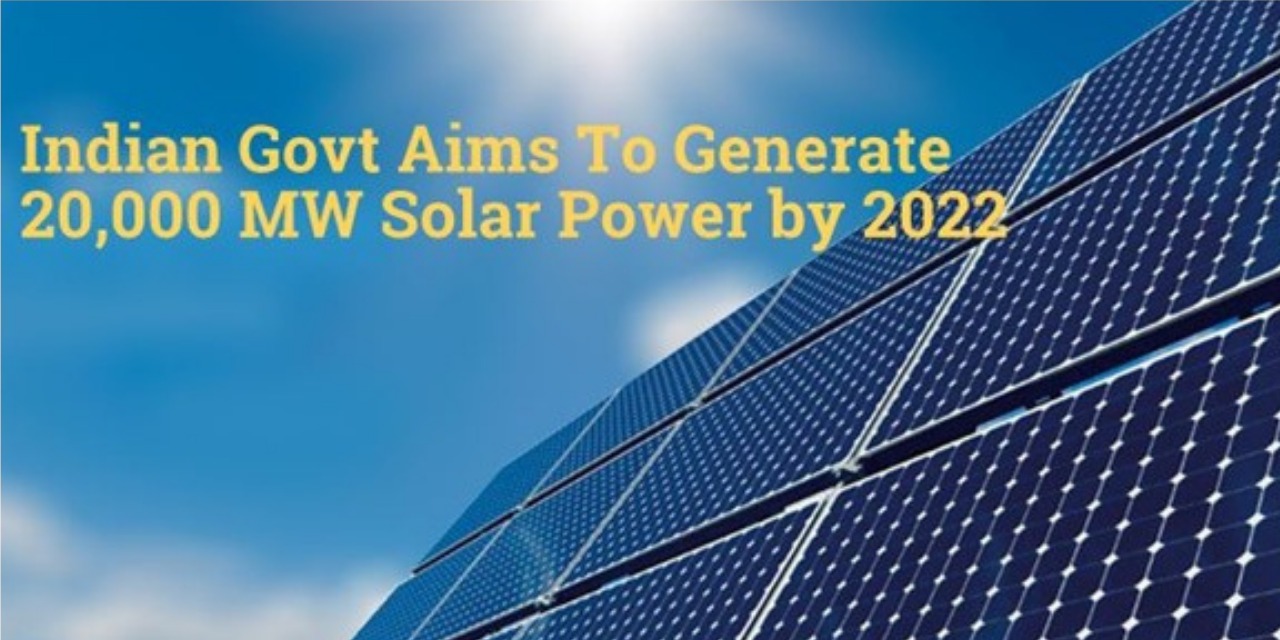 India is facing a severe energy shortage that is hampering its industrial growth and economic progress. The construction of new power plants inevitably depends on the import of highly volatile fossil fuels. India is highly dependent on fossil fuels for its energy needs. Most of the electricity is generated by coal and oil power plants, which contribute significantly to the emission of greenhouse gases.

Therefore, it is important to manage the energy crisis through careful use of abundant renewable energy resources such as biomass, solar energy, wind energy and geothermal energy.

Solar energy has immense scope in India. The geographic location of the country stands out as an advantage for the generation of solar energy. The reason is that India is a tropical country and receives solar radiation almost during the year, which is equivalent to 3,000 hours of sunshine and equates to over 5,000 trillion kWh. Almost all parts of India receive approximately 7 kWh of solar radiation per square meters.

Due to their location, states like Andhra Pradesh, Bihar, Gujarat, Haryana, Madhya Pradesh, Maharashtra, Orissa, Punjab,Rajasthan and West Bengal have great potential to harness solar energy. Since 65.07 % of the population lives in rural areas with barren and under-used  land, there are many possibilities to promote solar energy in these areas.

The use of solar energy can reduce the use of firewood in rural households which will help in protecting the forest and wildlife .

Many major projects have been proposed in India, some of these are:

ii). The Jawaharlal Nehru National Solar Mission (JNNSM) launched by the Center aims at 20,000 MW of

iii) Gujarat’s pioneering solar energy policy aims at 1,000 MW of solar power generation and Rs. The 130 billion solar plan was unveiled in July 2009, which plans to produce 20 GW of solar energy by 2020.

In addition to the above, approximately 66 MW are installed for various applications in the rural area of ​​, which is equivalent to being used in solar lanterns., street lighting systems and solar water pumps, etc.

The Indian government has begun to recognize the importance of solar energy in the economic growth of the country. Prime Minister Manmohan Singh,once said that solar energy will transform rural India and launched a National Solar Mission in 2010. Initial solar power generation in the country increased from less than 12 MW in 2009 to 190 MW in 2011.

It is projected to increase fivefold to 1,000 MW by March 2013, but the country still has a long way to go to meet its target increase in solar energy. electricity to 20 gigawatts by 2020. All over India there are still thousands of villages with lots of sun but little electricity.

Intelizon  has  installed over 40000 solar street lights and over 200000 solar home systems with a return rate of less than 1 %.Rajasthan Railways recently installed Zonstreet CCTV 30W LED Solar Street Light for surveillance and security at their intersections. Currently, the crossings are manned and do not have a remote monitoring system.

We installed 66 lights across the state of Rajasthan at 33 intersections (2 lights per intersection). We started this project in April 2019 and in September 2019 the installation was completed and now all the lights work fine there with no complaints.

Our systems not only provide wireless lighting but also remote surveillance.

This allows authorities to provide security to citizens in remote locations and, based on surveillance data, to provide greater security. The completely wireless lighting and surveillance function is unique in that it requires no maintenance and simplifies installation.