Solar power is the technology which harnesses the sun’s energy into useable electricity. We are now all familiar with photovoltaic (PV) cells that are also known as solar panels. These are nowadays commonly found on spacecraft, handheld calculators, rooftops & stand along street lights. Solar cells are made up of semiconductor materials. Solar cells knock electrons loose from the atoms when sunlight strikes on them. Eventually, these electrons flow through the solar cell so as to generate electricity. Solar-thermal power plants employ various techniques on a larger scale to concentrate the sun’s energy as a heating source. This heat s subsequently used for boiling water in order to drive a steam turbine which generates electricity. 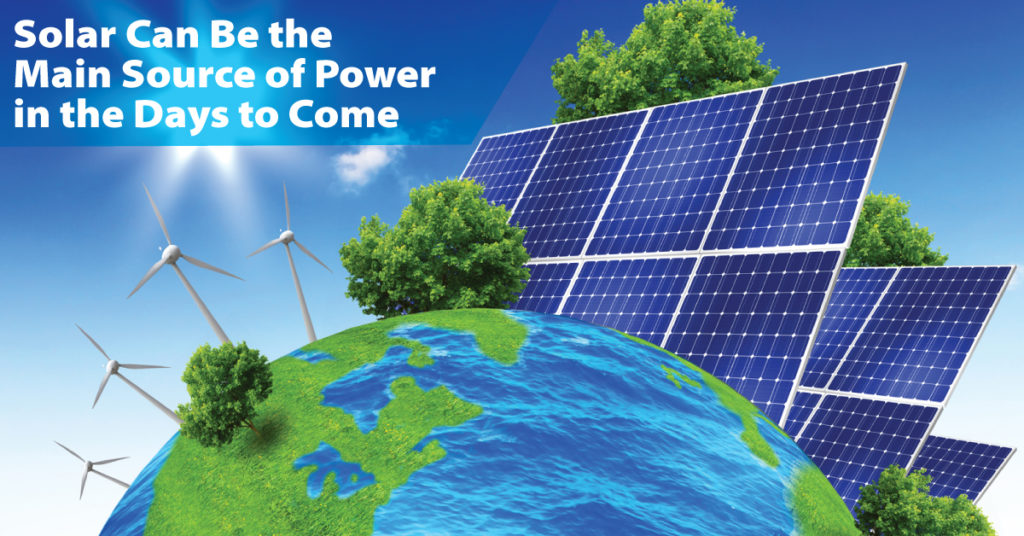 There are king troughs of U-shaped mirrors focusing sunlight on a pipe of oil running through the middle in a certain technique. This hot oil then boils water for generation of electricity. In another technique, moveable mirrors are used to focus the rays of the sun on a collector tower having a receiver. Heat for running a generator is passed on to the molten salt flowing through the receiver.

There are other solar power techniques which are mostly passive. Large windows are placed on the sunny side of the building which allows sunlight to fall on heat-absorbent materials laid on the floor & walls. Surfaces will then release heat to keep the building warm during the night. Absorbent plates in a similar fashion on rooftops can heat liquids in tubes so as to supply hot water to the household.

The Sun is the Largest Source of Energy

In fact, the sun is the largest source of energy. By mid-century as we learn better ways of harvesting sunlight, it can also be helpful in reigning in global warming by preventing in releasing carbon dioxide emissions as per report of the International Energy Agency. This is one of the good news for the solar industry which has witnessed phenomenal growth lately. Global demand for solar energy is expected to double every two years through 2022. This is mainly because prices are likely to fall & technology will continue to improve. The United States is one of the markets which are poised for sturdy growth.

Prices of PV systems will drop by almost 65% by the year 2050. Governments around the world will by then be offering clear policies in support of the solar sector. In the meanwhile sops from the governments for the solar investment tax credit on residential & commercial properties will boost the market. According to the IEA, PV has dominated the market & will continue to do so through 2030. However, the picture may eventually alter once the generation of solar energy moves from 5% to 15% of total electricity generation where solar thermal electricity may take over.

Solar to be the Largest Source of Electricity by 2050

The sun, in fact, is the largest source of energy in the solar system. On earth, wind, hydro, nuclear & fossil fuels come nowhere it. A pair of reports put up by the International Energy Agency suggests a roadmap for Solar Photovoltaic (PV) systems may be able to generate almost 16% of total electricity produced in the world. Similarly, they predict that Solar Thermal Electricity (STE) could be generating an additional 16% generation of total global electricity by mid-century. Both these solar technologies will be able to prevent more than 6 billion tons of carbon dioxide every year.

What We Do at Intelizon

Presently Intelizon is focused on solar home systems & solar street lights, including the hybrid version of smart streetlights connected to the grid but having an inbuilt battery which gets active during emergencies. Zonpower is a home solar DC system which offered by Intelizon which saves plenty from your electricity bill by running fans, lights, chargers & television sets in some cases. Zonpower is ideal for homes, offices & other residential & commercial properties that are fed up of power outages. Zonstreet series of outdoor solar street lights are standalone projects providing illumination in outdoor spaces. Intelizon has innovatively integrated it with an inbuilt CCTV camera for surveillance & with Internet of Things (IoT). These variants of Zonstreet allow remote control & monitoring of these outdoor lights that are ideal for use in factories, campuses, parks, petrol pumps, villages & communities.