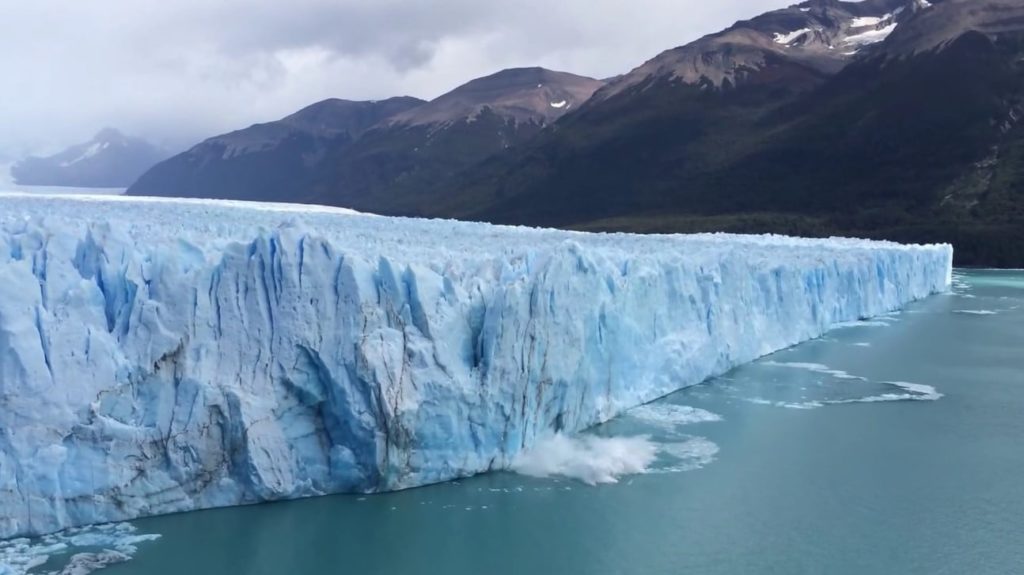 The dramatic melting down of the world’s mountain glaciers from the Alps to the Himalayas is the result of man-made global warming rather than natural variability in climate say climate scientists.

Until now, scientists had a limited understanding of what happens under the water at the point where land-based glaciers meet the sea. Using a combination of radar, sonar and time lapse photography, a team of researchers has now revealed the first detailed movements of the underwater changes over time. Their findings suggest that the theories currently used to gauge glacier change are underestimating glacier ice loss.

Ice that took centuries to develop can vanish in just a few years. A glacier doesn’t melt slowly and steadily like an ice cube on a table. Once glacial ice begins to break down, the interaction of meltwater and sea water with the glacier’s structure can cause increasingly fast melting and retreat. Today, Earth’s surface is made up of 71% water, 10% ice and 19% land. Most of the world’s ice is in the Arctic and Antarctic, but some of it is scattered around Earth in the form of mountain glaciers.

Water not only expands when frozen, but also when heated, and it is estimated that in the 21st century the melting of ice caps and glaciers combined with the thermal expansion of ocean water will cause an average increase of sea level of roughly a meter (a bit more than one yard). That’s an average; in some places it will rise more and in others less, in part because (as we now know through satellite measurements) sea level itself varies, bulging in some places and slumping in others. In Greenland, for example, it is expected that as the ice melts into the ocean the land mass will rebound, in effect “bouncing back” after it was pushed down by the weight of the ice. Sea levels may actually go down in some regions, but rising sea levels will be a critical issue in many other parts of the planet, adversely affecting billions of people in India, Bangladesh and China as well as along the U.S. Gulf and Northwest coasts

Glaciers are sentinels of climate change. They are the most visible evidence of global warming today. In addition to raising sea water levels, widespread loss of glaciers will likely alter climate patterns in other complex ways. For example, glaciers’ white surfaces reflect the sun’s rays, helping to keep our current climate mild. When glaciers melt, darker exposed surfaces absorb and release heat, raising temperatures. Our way of life is based on climate as we know it.

Humankind has become dependent on the burning of fossil fuels to support our way of life, but it increases global warming at an unnatural rate. To restore the glaciers we need to utilize alternative energy sources, increase our energy efficiency and decrease our individual carbon footprints.